The weekend of January 30th and 31st, hundreds of high school students descended on the Texas State Capitol to participate in the 69th annual YMCA Youth and Government State Conference. The conference is designed to gather young leaders from all over the state and provide a hands-on, real life government experience, fostering interest in the democratic process and excitement in the potential of political engagement. This year, Austin ISD’s Austin High Youth in Government Club brought a high-impact team to the YAG State Conference, finishing with two distinguished delegates and a State Affairs proposal aimed at improving the Texas high school graduation rate via statewide implementation of freshman MAPS classes.

From hundreds of peer-reviewed proposals addressing 30 pre-selected state affairs topics, Miranda Gershoni and Madison Perry’s MAPS (Methods for Academic and Personal Success) class proposal was ranked among the best in the state by the conference participants, winning a chance to be viewed by Texas Governor Greg Abbott and affect actual state legislation.  That’s right…youth leaders from all over Texas thought Austin High’s MAPS class model, which explicitly teaches freshmen Social and Emotional Learning skills to help set them on a successful path for high school and beyond, should be a state-wide requirement to raise graduation rates! 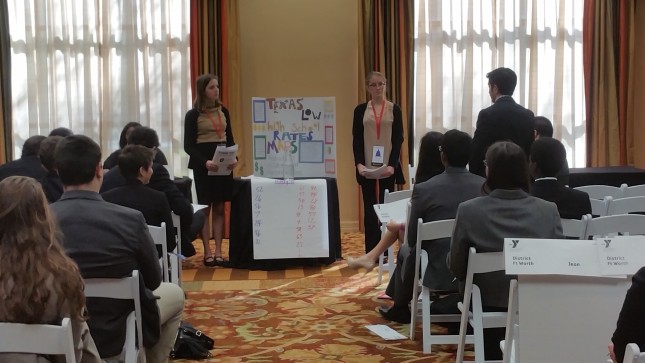 Ms. Gershoni, who led the development of the proposal, drew upon her freshman experience in the MAPS class at Austin High and the organizational and interpersonal skills it helped her develop. She was also inspired by her participation on a student team that helped to facilitate a workshop on MAPS-style student engagement activities at last October’s National Dropout Prevention Network Conference.  Armed with her passion for helping her peers succeed and her experience with presenting at this national conference, Gershoni led her team in convincing other youth leaders that SEL skills taught in MAPS classes statewide could lead to more Texas high school graduates ready for career and life. District data backs up their proposal’s claim: At high schools with high MAPS class implementation rates, administrators have seen positive indicators like a 50% reduction in suspensions, a 71% reduction in discipline referrals, and a 41% reduction in freshman failures.

Mr. Steven Wnorozski, Austin High’s sponsor of the Youth in Government Club, was proud of Ms. Gershoni and Ms. Perry’s winning proposal, and the recognition of distinguished delegates Mr. Theo Symonds and Mr. Joseph Smith-Klein. Participating in the club, and preparing for experiences like the district and state-level YAG conferences, help build the Social and Emotional Learning skills of time management, organization, collaboration, and self-efficacy. “Our club is small, but we’ve been before the school board and have been recognized for our achievements,” he says. “It allows students to be active in politics and try to solve problems that really exist.” The Youth in Government club will send delegates to the Youth and Government’s Conference on National Affairs, and is also considering participation in the Annette Strauss Institute for Civic Life’s Speak Up! Speak Out! event in May.

Ms. Gershoni said that her experience at the state Youth and Government Conference has inspired her to consider a career in public policy. She also found that just being present at the conference was inspiring in another way: “Sometimes high school just seems like a big swimming pool, with everybody just trying to swim to the top to graduate and get on with their lives like you know you’re supposed to,” she said. “It was great to feel like I was poking my head up out of the water, and seeing all these other young people like me who were poking their heads up too, who are concerned about the big picture-the future of the state and country-and who have big ideas to help affect it.”

Congratulations to Miranda Gershoni, Madison Perry, Theo Symonds, Joseph Smith-Klein, Mr. Wnoroski, and Austin High!  We are sure #AISDProud of these #SELSmart, engaged young people on the fast-track to making big changes in their world!