Hello once again, SEL fans!  And a very happy Halloween to everyone!   Let’s start with a little experiment this week.  Does this group of shapes do anything for ya?

Not really? How about this?

That one looks like a slightly bemused squareface guy, right?  Same shapes, different arrangement, and all of a sudden we’ve got a new little buddy on the screen.  Well guess what, dear reader: you have just participated in our neurological word of the week…

Humans are hardwired from the moment we are born to recognize faces.  Newborn babies have underdeveloped distance vision, but they are capable of seeing clearly up to about 12 inches—just about the distance at which nurturing caregivers hover to feed, smile and coo at the new little human.   From this early foundation we continue to focus on faces…after all, we don’t usually show off pictures of our family and friends’ ears or knees!  Studies have shown that we have a special area of our brain that contains neurons dedicated only to recognizing faces.[ii]

Further, as you may have done with this rather enthusiastic cup of coffee, we don’t just recognize facial features; we also are so good at reading emotion that we almost always assign a feeling or personality to faces we see.  After all, humans have over 40 different facial muscles, allowing us to perform thousands of distinct and complex facial expressions that we use for nonverbal communication with each other. [iii] 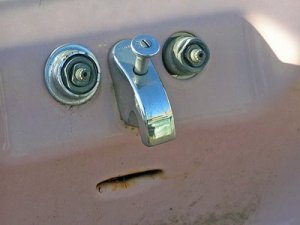 Our expertise in both recognizing faces and facial expressions could come from an advantageous evolutionary adaptation.  For tiny baby humans, being able to interpret and respond to parental faces early on could help kickstart bonding, leading to more positive attention from caregivers and therefore more opportunity to thrive.   Also, being able to quickly recognize friendly faces vs. hostile faces may have promoted the early survival of our species. [iv]

You were a little worried about that mop, right?  You emotion-interpretation expert, you!  How about this one? 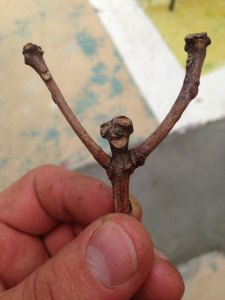 Did you empathize with that twig a bit?  A ha!  There’s the distinct social and emotional aspect of pareidolia.  Even though our ability to identify faces and facial expressions may have been an early adaptation for safety and survival, our frontal cortex—the part of our brain responsible for higher thinking—gives us the ability to imagine how we would feel undergoing the emotion or experience that we recognize in others.  Pareidolia, this innate tendency to search for and see faces, could be an ancient sign of our profound human capacity for empathy.

So the next time you are startled by a creepy countenance emerging from a wooden door:

Or feel cheery with a cheese grater:

Feel connected to your ancient roots, and your wondrous frontal cortex.  You are a finely-tuned human expert!

2 thoughts on “Pareido-WHAT? Or…You are an Emotion-Reading Facial Recognition Machine!”